Diwali ~ Festival of Lights—-
Diwali is known as the ‘festival of lights’ comes exactly .. days after Dussehra on Amavas (new moon), during the dark fortnight of Kartik some time in October or November. According to Hindu religious scriptures On this day, Lord Ram returned to his Kingdom Ayodhya after the exile of fourteen years (vanvaas) imposed by his stepmother Kaikeyi in jealousy, because Ram would become the king and not her own son Bharat. During this period he put an end to the demon Ravana of Lanka, who was a great Pundit, highly learned but still evil dominated his mind. After this victory of Good over Evil, Rama returned to Ayodhya. In Ayodhya, the people welcomed them by lighting rows of clay lamps. So, it is an occasion in honor of Rama’s victory over Ravana.
Five Days of Diwali—-
Diwali is a festival of lights and is celebrated with great enthusiasm. The uniqueness of this festival is its harmony of five varied philosophies, with each day to a special thought or ideal. If people celebrate each of its five days of festivities with true understanding, it will uplift and enrich their lives.
The first day of Diwali–Dhanteras :—
Diwali starts with the ..th lunar day of Krishna Paksh called Dhanvantari Triodasi or Dhanwantari Triodasi also called Dhanteras. On this day, Lord Dhanwantari came out of the ocean with Ayurvedic for mankind. On this day at sunset, Hindus should bathe and offer a lighted deeya with Prasad to Yama Raj (the Lord of Death) and pray for protection from untimely death. Dhanteras holds a lot more significance for the business community.


The third day of Diwali–Lakshmi Puja on Diwali :—

The third day of Diwali is the actual Diwali. On this day Maa Lakshmi (Goddess of prosperity and wealth) is worshipped to achieve the blessings of wealth and prosperity, the triumph of good over evil and light over darkness. It is believed that Goddess Laxmi visit everyone during Diwali and brings peace and prosperity to all.

On this day, Govardhan Pooja is performed. On this day Lord Krishna caused the people of Brij to perform Govardhan Pooja. This day is also observed as Annakoot meaning mountain of food. People cook fifty-six or 108 different types of food for the bhog (the offering of food) toKrishna.

The fifth day of the Diwali is called Bhratri Dauj. This is the day after Goverdhan Pooja is performed and normally two days after Diwali day. It is a day dedicated to sisters. On this day Yama (Lord of death) visited his sister Yamuna. He gave his sister a Vardhan (a boon) that whosoever visits her on this day shall be liberated from all sins. They will achieve Moksha or final emancipation. From then on, brothers visit their sisters on this day to enquire of their welfare. 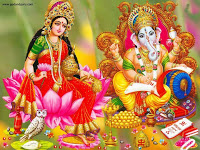 Ganesh-Lakshmi Puja—-
Ganeshji is a must for Diwali pooja as he is to be worshiped in all pujas before any other god or goddess. Lakshmi Puja consists of a combined puja of five deities: Ganesha is worshiped at the beginning of every auspicious act as Vighnaharta; Goddess Lakshmi is worshiped in her three forms – Mahalakshmi (the goddess of wealth and money), Mahasaraswati (the goddess of books and learning), and Mahakali; Kuber (the treasurer of the gods) is also worshiped. Traditionally on Diwali night, Ganesh shares the altar with Lakshmi. During puja, the idol of goddess Lakshmi is placed on the left and Lord Ganesha, the elephant headed god is kept on the right. Shree Ganesh is the god of good beginnings and the fabled remover of obstacles. Lakshmi is the goddess of wealth and prosperity and also personifies beauty, grace, and charm. She is normally depicted seated on a lotus with gold coins. On Diwali when both is placed side by side, Lakshmi Ganesh hold out promise of a year of fulfillment…..