Meaning: Man saw this plant but could not compare it to any other. Hence archaeologists began calling it tulsi. – Brahmavaivarta Puran, Prakrutikhand .5
If one worships Vishnu without tulsi leaves then it is in vain because without offering tulsi leaves or without sprinkling food with water using them, Vishnu does not partake of the offering. Looking at, touching, meditating upon, praying to, worshipping, planting or eating tulsi leaves can cleanse one of sins committed in several births in the bygone eras. It is said that all deities reside in this plant right from the roots to the shoots.’ 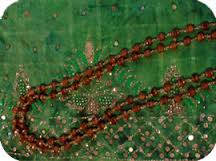 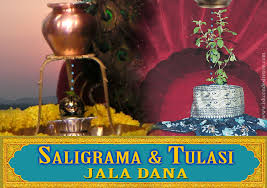 Why are tulsi leaves offered to Vishnu?:

Commonly it is said that in the ritualistic worship of a deity, it is offered its favourite item; for example, Ganapati likes red flowers, Shankar bel and Vishnu tulsi. Then a story as to why that deity likes that particular substance is narrated. In reality superior deities like Shankar, Vishnu, Ganapati do not have any likes or dislikes. Yet the reason for offering certain substances to certain deities is as follows.

One of the objectives of ritualistic worship is that the idol which is to be worshipped should get charged with divine consciousness (chaitanya) and that it should help one in making spiritual progress. In order to generate that divine consciousness, the substance which is offered to that idol has more ability to attract the pure particles (pavitrakas) [most subtle spiritual particles] of that deity, from as far as the maha region as compared to other substances. Red flowers have the ability to attract the pure particles of Ganapati, bel of Shankar, tulsi of Vishnu, etc. Hence tulsi leaves are offered to Vishnu. A tulsi plant is planted on a pedestal in front of the house and tulsi is even wedded to Krishna. 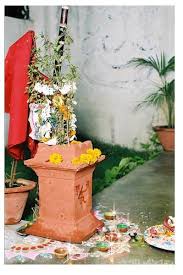 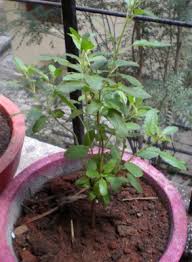 A majority of Hindu homes across the world have at least one Tulsi plant so that they may regularly worship Vrinda Devi. Many plant several Tulsi, creating their own small forest, which is referred to as a Vrindavan.  Tulsi Vivah is a holiday that glorifies Vrinda Devi by celebrating her marrage to Lord Vishnu. The holiday includes elaborate ceremonies  performed in everyone’s own private Vrindavans – their home Tulsi gardens.

Of the numerous Hindu festivals, Tulsi Vivah festival, a significant Tulsi Pooja, is carried out by the worshippers of Tulsi/basil plant.
The worship of Tulsi, is one of the significant aspects related to one’s dailyprayers in a Hindu household, be it, the inmates are worshippers of Siva or Vishnu.
Every pious Hindu household, has a Tulsi Vrindavan in their courtyard. Apart from one’s daily worship of Tulsi, Tulsi Vivah festival-a pooja attributed to Tulsi is performed annually.
Tulsi Pooja, owing to Tulsi Vivah festival, falls in the month of (October-November), in the Hindu month of Karthika, observed on three different dates.
The festival is observed usually on Ekadashi, on the day after Diwali, or on the day after Ekadashi, which, is Dwadashi. Some also observe on Karthik Purnima (full moon day in the month of Karthika)
Legend
Legend states that Tulsi, named Vrinda (Brinda), was the wife of Jalandhar who sought a boon with the Gods, of invincibility as long as his wife is chaste.
Vrinda was a devout wife, who upheld chastity. Jalandhar, owing to the boon that he acquired, began to traumatise people that it became a difficult task for Gods to handle.
Gods took refuge in Lord Vishnu, who came to their resort, by disguising Himself as Jalandhar and living with Vrinda to break her chastity.
Vrinda who lost her chastity to Lord Vishnu, on discovering the truth cursed Him to become a stone. She further cursed that at one point in time, He would also suffer the pangs of separation of His consort;she then immolated herself.
Lord Vishnu, acknowledging Vrinda’s purity, transformed her into a Tulsi plant, to be worshipped in all homes. He then became a stone (Shaligrama). In the Ramavatar, the Lord, as the result of the curse, suffered separation from His consort, Sita.
Tulsi Vivah festival-a Tusli pooja is observed in all households as a mark of reminder of the divine relationship between the Lord and Tulsi.
Tulsi is also said to be a form of Mahalakshmi. It is also referred as Vishnupriya, the beloved of Lord Vishnu.
Performing Tusli Vivah Festival-A Tulsi Pooja
Tulsi Vivah, is observed at dusk in homes. The place is cleaned up and rangolis are drawn in front of Tulsi Vrindavan. Tulsi plant, being treated as the bride is smeared with turmeric and vermilion. Small bangles are hang on the tender branches. A small cloth is wound around the plant. A Shaligrama is placed next to the Tulsi as the symbol of Mahavishnu, the groom. A priest is summoned and all rites, involved in a formal wedding are conducted.
In some places, a cloth is held in front of the plant, which acts like a screen, while mantras are chanted. At the end of the mantra recitation, the cloth is removed as a mark of culmination of the wedding.
The performance of this pooja bestows prosperity, a cordial relationship between partners and all other material boons. When done with proper understanding of its essence, it bestows self realisation, the end of all spiritual pursuits.
Spiritual Significance
A pure mind is indispensable for spiritual evolvement. It reflects in the actions of a person. Spiritual evolvement, but becomes a natural and spontaneous succession of it, as in the case of Vrinda. Vrinda was a pure soul. The merging of Vrinda with the Lord symbolically represents, the merging of the individual soul with the divine. It symbolically reveals the oneness of the soul and the divine, as one indivisible whole, the essence of Vedanta.
Tulsi, in one’s household is a reminder of purity, which helps one realise the ultimate goal of one’s life.
Hence let us perform Tulsi-Vivah festival, a Tulsi Pooja,understanding its essence.