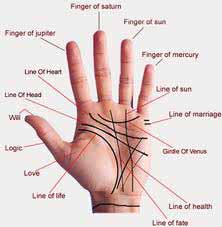 A cross on the line indicates that a tragedy has be fallen someone dear to the subject. If the cross touches the head line, there could have been disappointment and tragedy in the life of the subject, due to separation, broken engagement or actual loss through death of one very close to the subject. If a broken heart line has cross bars on the both sides, it may cause death of the subject by heart failure. A number of fine lines drooping down from it denote an inconsistent nature, inclined to fritter away affection through flirtations. Such a person will tend to be in love with someone or the other, but the affection is never serious.

The square is a protective sign, and when it is found on the heart line, especially on the heart line, especially on the broken portion, it acts as a remedial measure.
When the heart line is without a branch and is thin – looking, the subject will have little affection. When the line is more conspicuous than the other lines on the palm, the subject will be full of love and affection. In such case, if the head line is good and the hand is also well marked in other respect, the subject will be kind hearted and liberal with money, especially with those who are in distress. Missionaries, nurses, helpers, true social workers and people possessed of the spirit of service probably have type of heart line.
This line is also called the line of luck of line Saturn. The financial prosperity of the subject is a adjudged from the fate line, and fame from the Sun line. According to most authors of book on palmistry, the fate line rise at the base of the palm and runs upward toward the base of the fingers. However, according to the Myrah Lawrance in the book Hand Analysis, the fate line has it origin on the upper part of the palm and run downward. But the consensus of opinion is that the fate lines rises from the base of the palm and rises upward toward the mount of Saturn can be treated as the fate line.
The fate line is generally not marked on the elementary, square or spatulate hands, the way it is on the philosophic, conic or psychic hands, as the latter three are more fatalistic than the former three. The fate line indicate the events of life, changes, successes or failures, difficulties to be faced in achieving the objective, and what is in the store in the time to come. In case there is no fate line on the both the palms of a person, especially when the hands are not elementary, square or spatulate, the life of the subject will the hands are not elementary, square or spatulate, the life of the subject will be uneventful. In the case of person with square hands, they have been found to be successful and financially well of even without a fate line on their palms. Such persons are self-made, and by dint of their hard work and dedication, they were also to support them in their efforts and bestow them with luck, they would have made more headway in life in terms of material success.
The mere presence of the fate line does not necessarily mean that the subject will be wealthy and successful. The shape of the hand, thumb, mounts, and other major lines, viz. lifeline, headline, heart line, and the presences of the sun will also have t be taken into account. The fate line, to be fruitful, should be deep, even, clear and straight, and not wavy. The main effect of the line is that the efforts put in by the subject bear fruit. He gets cooperation from various sources.
The early start of the fate line confers the following-
a)     Starting one’s career or entering into business at an early age.
b)     Deriving monetary benefit during school days, or while doing higher studies by getting scholarship/ stipend.
c)     Earning money by way of tuition in school/ college, either because of family’s financial circumstances or on account of the subject’s resolve not to be dependent upon anyone, even parents.
d)     Accrual of monetary benefit at an early age from an unusual source, linked to affection, compassion, etc.
e)     Enjoying comfort and luxuries from childhood on account of the sound financial position of the family.
f)       Betterment in the status and prosperity of the family of the father/ mother, who generally are the earning members in the subject’s childhood.
Generally, the fate line is the central line running from the wrist towards the base of the Saturn finger. But in a good number of cases, the fate line starts from varying position on the palm, and each source has its own significance. The line may start from any one of the following position-
Rising from the wrist AA
Rising from the life line BB
Rising from inside the life line CC
Rising from inside the life line on the mount if Venus DD