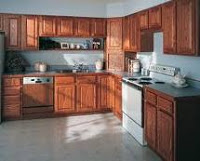 According to vastu shastra health and prosperity of the family is highly depends upon the kitchen arrangement. More the pleasant, welcoming and efficient your kitchen, more healthier & prosperous you are.
If you would like to enhance the power of your kitchen, take a look at following suggestions:- —–
Fire, an important element of vastu should be placed at the south east corner of the kitchen. Second best option available is at North west direction . Placement of stove is a great thing according to the vastu shastra.

In some duplex houses, there is a bedroom above the kitchen. It is quite probable that the bed is just located above the stove. This is not a good arrangment. You should either reposition the bed or the stove. Also check for the toilet on the upper level. It should not be located directly on top of the fire. It is important that your plumbing is working properly.

Dripping tap or leaking pipes symbolizes that wealth is being drained from your life. You should use the colours like green, lemon yellow & orange which are very supportive colours to fire. Avoid using black, grey and blue in the kitchen.

Toilet door just opposite the kitchen is considered unfavorable placement. You can either reposition the door or install an automatic door closer. Case Study:- A highly qualified lady called me few months ago for an appointment to audit her house, as she was facing a relationship problem since last one year. This problem floated soon after family moved to new place. A vastu analysis of her house revealed that stress in the relationship was just due to the kitchen interior. The gas (fire) was just too closed to water.

There was hardly distance of one feet between fire and water. Sadly she has spent huge amount in kitchen interior . Here both the element i.e. fire and water are having a clash, causing family members to have disagreements resulting in to stress. We have adviced two possible solutions to cure this vastu defect. They were making a wooden partition or shifting a water (which was also at wrong corner) to other side. A lot of pain in the relationship could have been avoided if they have been alert on vastu arrangement in the kitchen at begining.