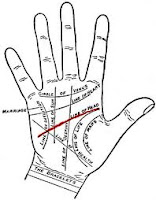 Dr. Shanker Adawal (Jyotishaacharya, PHD, MBA)
In Hindu palmistry the head line is called dhan rekha and Marti rekha. From this line we can make out the mentality, the power of mental concentration and the ability to exert self control, possessed by the subject. It should be obvious that the mind plays a very vital role in the shaping of out destiny. However good the human machinery may be, it cannot function properly unless there is a proper mental attitude. Mind is the force that enables the subject to alter his life. The king of mind possessed by the subject indicates the future course of life. Further, from the study of the headline it is possible to determine the quality and quantity of brain power.
The construction of the headline mirrors the working of the brain. There are numerous types of headline, with varying effects. The variations are the size of the line, the course the line follows, the placement and position of the line on the palm, and so on. The variations are so many that the subject requires intensive study.
There is no difference of opinion with regard to the starting point and the ending point of the head line. The line is found under the line of heart, more or less parallel to it. The head line starts about midway between the Jupiter finger and the thumb. Any abnormality in the position of the head line indicates an abnormal tendency. Normally, the head line beings under the Jupiter finger either joined to the life line or a little apart from it. It can, however, start from a place inside the life line. The three different positions for the start of the head line are—
Rising inside the life line on the lower mount of Mars. (A)
Line of head and line are closely joined together. (B)
Line of head starts away from the line of life. (C)
Persons whose headline rises inside the life line on the lower mount of Mars have qualities designated by the planet Mars. They would have a tendency for argumentative fighting, and generally are of a quarrelsome disposition. These qualities will be intensified if the head lines goes straight to the upper mount of Mars on the percussion under the mount of Mercury. If the head line, towards the end, takes an upward turn to the line of heart, the person concerned will have a quarrelsome and irritable nature, generating murderous instincts. If the head line slops and the end, downwards towards the mount of Moon, the quarrelsome disposition will get reduced or softened due to introspection.
Persons who have a head line which is closely  joined with  the life line from the starting point  and  continues  to be merged  with it for  some distance are of cautious nature they are possessed of shyness and timidity. According to one view, those who have such a head line about themselves during the tie period signified by the merger in other words, they enjoy the guidance of their parents and elders. We can say that they possibly do not have the confidence required to decide matters concerning their life. The availability of guidance can prove a boon as well as hindrance.
Persons who have the third type of head line, which is set a little apart from the life line, are self- confident and determined. They also have the gift of intuition. The demise of parents or if parents are not in a position to render any guidance, leaves these individuals to their own device. Self- confidence and the determination will be moderate if the space between the head line and life line is not very wide. If the gap is very wide, the subject will have excessive determination and a reckless spirit, as a result of which he may not give due consideration to the pros and cons of his actions.
As with the starting point, there are three normal positions for the termination of this line on the opposite side of the palm. The first is a perfect straight line, from one end to other. This type of line indicates that the subject is extremely practical, has sound judgment and is level- headed. The possessors of this type of line have great organizational ability in whatever sphere of life they may engage themselves. Women who have such a head line are also gifted with good organization ability, business acumen and entrepreneurship, qualities earlier associated with men. The second type is when the head line turns up slightly at the end, or a branch goes in an upward direction. This line indicates strong mental power and a very acquisitive nature. For those who like to amass wealth, such a head line plays a helpful role. The third type of termination is of the head line sloping slightly downwards. This line shows a blend of practical and artistic tendencies. The line of head may be straight, from one end to other or it may rise or fall, and shore a deep depression towards the mount of moon or in the center of the palm.
The course of the head line affects the size of the quadrangle (the space between the heart line and the head line. When the quadrangle is even, well shaped, neither narrow nor very broad even. The running of the head line close to the heart line, thereby making the quadrangle narrow, indicates a tendency for asthma. Persons with a narrow quadrangle are narrow- minded and do not like to spend money on other. In a bad hand the line makes one meticulous and very disciplined, and in order to achieve one’s aim, one may hesitate to behave in a way that may hurt the feeling of others.