Panchang is an ancient vedic science that helps in knowing when to synchronize your actions with good times to reduce obstacles and increase chances for success. “Panch” means five and “Ang” means parts in Sanskrit. A Panchang is made up of five parts based on the lunar calander. These are used for fixing Muhurthas and preparation of horoscopes and predictions by Astrologers.
Panchang of the day based on the calculations of time, latitude, longitude, planetary positions and timezone of your current place of living. It is consulted for finding and selecting an appropriate and auspicious time for important occasions, ceremonies or actions like marriage, education, travel, starting new business or project, examination, interview etc. The five parts of Panchang are described below :
(.) Tithi (lunar day)
(.) Nakshatra (constellation)
(.) Yoga (an auspicious moment)
(4) Karan (half of the part of Tithi)
(5) Vaar (day of the week)

Tithi is the date according to the Hindu lunar calendar. The Hindu lunar calendar consists of a dark and a bright fortnight also called Krishna paksha and Shukla Paksha. Tithi is said to be complete when moon has 12 degree from the sun. when moon complete 12 degree each time one tithi is comptete. There are 3. tithis in a lunar month. There are several rituals and festivals associated with Tithis. Most of the festivals fall on the new moon day (amavsaya) or the full moon day (poornma). It is important to note that starting or ending of a Tithi depends upon the degree of Moon from that of Sun therefore a Tithi ends or starts at any time in a day not like the Modern Time when a date changes at midnight.

There are 30 tithis in a lunar month. In Indian Astrology, the calculation of the Tithis starts from Pratipada (The first day in each half of the lunar month) of the Shukla-Paksha. Tithis are as follows : 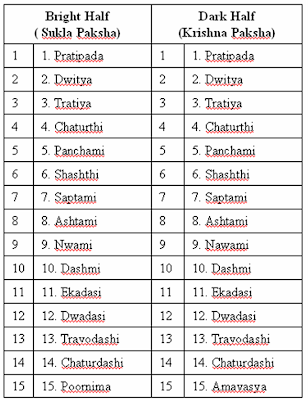 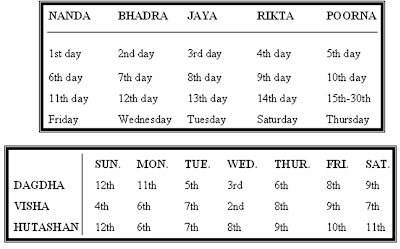 2. Nakshatra:—
Nakshatra Literally means “that which does not decay.” A group of stars is called Nakshatra. The whole space has been divided into 27 parts and each part has been given the name of Nakshatra. There are twenty-seven Nakshatras considered in Vedic Astrology. Each one of them has thirteen degree and twenty minutes of the zodiac. Each Nakshatra has a planetary lord used for Vimsottari Dasa and K.P. calculations. Nakshatra can be known with help of degrees of Moon in a particular sign at the time of birth. They are as follows :

The Indian astrologers believe that the combination of the last 15 Ghati of ‘Uttarashadha Nakshatra’ and the first 4 Ghati of the Shravani Nakshatra i.e. 19 Ghatis in all, constitute the‘Abhijeet Nakshatra’ and this particular Nakshatra is considered to be very auspicious to begin a good work.
PANCHAKA NAKSHATRA :– The following group of five Nakshatras are considered as having five defects (Panchakadosha). They are Dhanistha, Shatabhisha, Purvabhadrapada, Uttarabhadrapada and Revati.
MOOLA NAKSHATRA :– A child taking birth in this Nakshatra, which consists of Jyestha, Aashlesha, Revati, Mool, Magha and Ashwini Nakshatra are not considered as auspicious. Therefore, for the pacification of this ‘Moola Nakshatra’, some specific rites are performed 27th days after the birth when the same Nakshatra returns. Out of these six Nakshatras, which constitute Moola Nakshatra, Jyeshtha and Moola are called ‘Gandant Moola’ and Aashlesha is called as ‘Sarpa Moola’.
ADHOMUKHA NAKSHATRA : –As the name of this Nakshatra implies, works like digging a well, or lying a foundation is considered as auspicious. This particular Nakshatra is itself constituted by Nakshatras. They are: Moola, Aashlesha, Vishakha, Kritika, Purvaphalguni, Purvashadha, Purvabhadrapada, Bharani and Magha.
DAGDHA NAKSHATRA : –For commencement of any work, these Nakshatras are considered as inauspicious. Therefore, commencing any work in this Nakshatra is prohibited if the days on which, this Nakshatra falls are as under-
Sunday – Bharani
Monday – Chitra
Tuesday – Uttarashadha
Wednesday – Dhanishtha
Thursday – Uttaraphalguni
Friday – Jyeshtha
Saturday – Revati

Nakshtra also indicate Yoni, Gana and Nadi of an individual.—

Yoni: There are 14 Yonis (animal symbols) in Vedic astrology assigned to nakshtras are as follows : 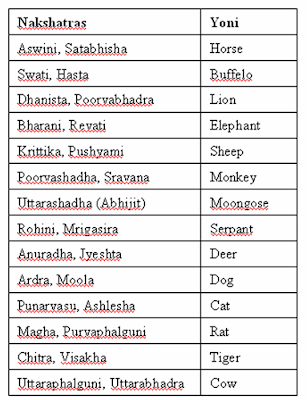 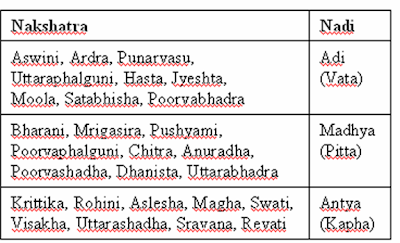 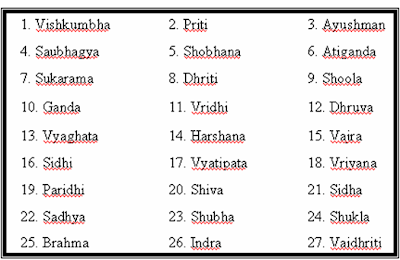 Half of Tithi is called “Karana”. A Karana is completed when the Nirayana longitude of the Moon gains every 6° on that of Sun. There are 11 karanas in total. Four of them occur just once a month and are called the Fixed Karanas. The other seven are movable Karanas. They repeat 8 times starting from 2nd half of the first lunar day of a month. 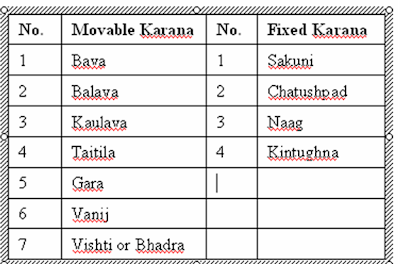 Each of the Karana is said to have its own influence and interpretation. ‘Vishti’ is considered the most inauspicious karana. No important or new work is done during the period of this karana.

There are 7 days in a week. The days of the week along with the ruler planet are as follows : 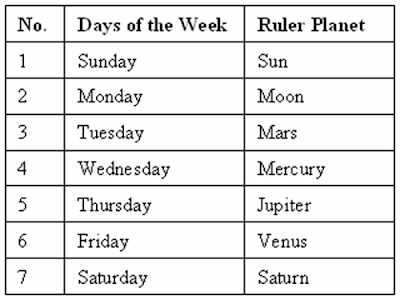 The counting of days begins from the sunrise of the first day to the sunrise of the second day. In astrology, this system is known as ‘AHORATRA’, which means day and night taken together. Omitting the first letter ‘A’ and the last three letters ‘T’,’R’,’A’, the word ‘HORA’ is coined from which, the English word ‘HOUR’ originated. There are 24 HORAS in all. 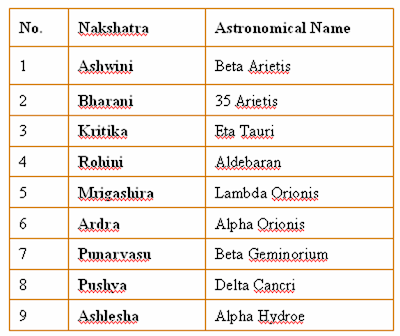 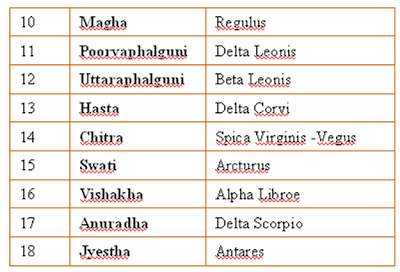 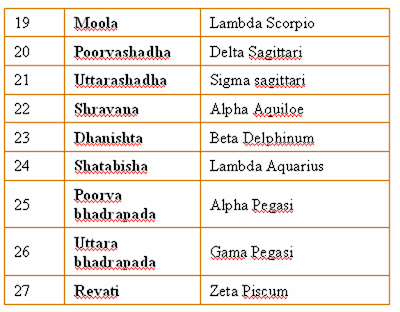 What is Panchak ???—by Dr. Anjna Agarwal 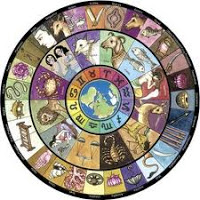 Dhanistha, Shatbhishak, Poorvabhadrapada, Uttarbhadrapada and Revati are five Nakshatras are known as a Panchak. Panchak means group of ‘Five’. In every month it is period of five days when Moon transits from Aquarius & Pisces Sign respectively. Panchak occurs when the moon’s longitude exist between 296 degrees and 360 degrees in sidreal calculation. It states that no auspicious work should be undertaken during this time like marraige, naamkaran, grihapravesh etc. According to Garuda Purana “Person who dies during Panchak does not get peace. Dhanishta Star to Rewati Star are known as Panchak Star. It is known that if any person who dies during this Panchak, is not good for the family left behind.”

According to Astrology if you perform any task during these Nakshatras you may have to repeat it for five times. During Panchak the elements in the universe become unbalanced and this causes an imbalance within the family structure. There are five tasks which are prohibited to perform during Panchak. Traveling in south direction, restoring fuel, funeral of body, building house and making bed are not considered auspicious to do during Panchak. According to the spiritual text the auspicious events like Marriage, Mundan, entering to a new House, welcome of a new Bride, construction of house and Upnayan Sanskara are prohibited during this period. The Panchak Nakshatras are not considered during the festivals of Raksha Bandhan and Bhaiya Dauj.