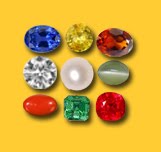 Legend of the Gemstones:—

Thus in all, eighty four different parts and constituents of the demon king Bali. Of them, only twenty-one are described as Gems or Jewels due to peculiar brilliance they possess. Of these twenty-one gems, only nine are most famous for their radiance and are hence known as Navaratna. Thus, there are nine main gems or jewels, twelve common gems and sixty-three ordinary gems which are also known as sub-gems.

Why Gemstones are Prescribed :—

Gemstones are prescribed to either strengthen or balance the energies of these planets in question, i.e. strengthen weak planets so that they do create some good effect, or further strengthen already strong planets, such that their effect is more pronounced. As an example, someone may want to strengthen Mercury to cure any speech impediment or skin inflammation, as a weak Mercury is known to cause these ailments. A person may want to strengthen Saturn if it is a Raj Yoga causing planet, in that case, in Saturn’s dasha or bhukti, the results given by Saturn multiply. Surely all good and bad effects multiply at the same time, there is a need for balance.

Gemstones should be worn strictly after consulting an astrologer because an Astrologer can only know which Gemstone is suitable and which is not according to your Rashi/Lagna/Ascendant and the position of the planet associated with the stone in your birth chart to get maximum benefits in life. It is necessary to purify the gemstone before wearing and the mantra associated with that Gemstone. When a Gemstone is worn it generates positive vibrations and powerful aura around the individual, which in turn protective and resists any untoward vibrations coming from external sources.

The Gemstones selected for use should always be in contact with one’s body to absorb their healing properties. All stones or gems have magnetic powers in varying degrees, and many of them are beneficial to us for their therapeutic cures. They emit vibrations and frequencies which have strong potential influence on our whole being. They create strong energy fields which enable us to be charged with their energies. The Gemstones are used for healing, transforming, balancing, and attuning the body, mind and soul. They are a manifestation of vibrancy, light and color, life, textures, transparency and clarity. They activate our abilities, soothe and comfort, heal and balance through the purity of their rays. The patterns in the stones reveal to us the changes that keep taking place, indicating that life is change – that the process of evolution is a cosmic law. Each Gem, tuned to a particular ray, has a special role to play. The more precious stones that you wear, the more strongly will you be charged with cosmic forces, radiating out into your surroundings.

It is based on the theory that certain Gemstones possess specific healing energies. Physical and emotional problems can block the body’s energy center, resulting in illness of some kind. When a Gemstone comes into contact with the body, its energy is released and transferred to the person. Use Gemstone therapy to unblock negative energy or heal the body and Gemstone meditation to heal the spirit.

Gemstones have an amazing capacity to absorb the cosmic vibes from the planets. Each precious stone has its own special energetic vibration from its magnetic field. Gemstones have been recognized since Ancient times. They were very much used in Ayurvedic medicine in the form of dust, or infusions or dipped in water. Due to this power they are considered as a part of the planets themselves. Almost every branch of astrology discusses gemstones as way to influence the impact of the planets on the native. 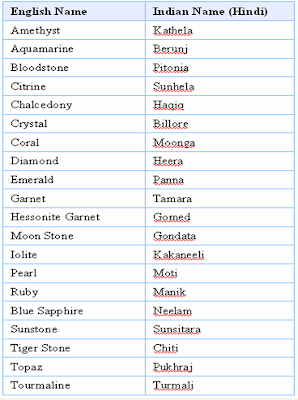